Stopping by the woods one cloudy morning 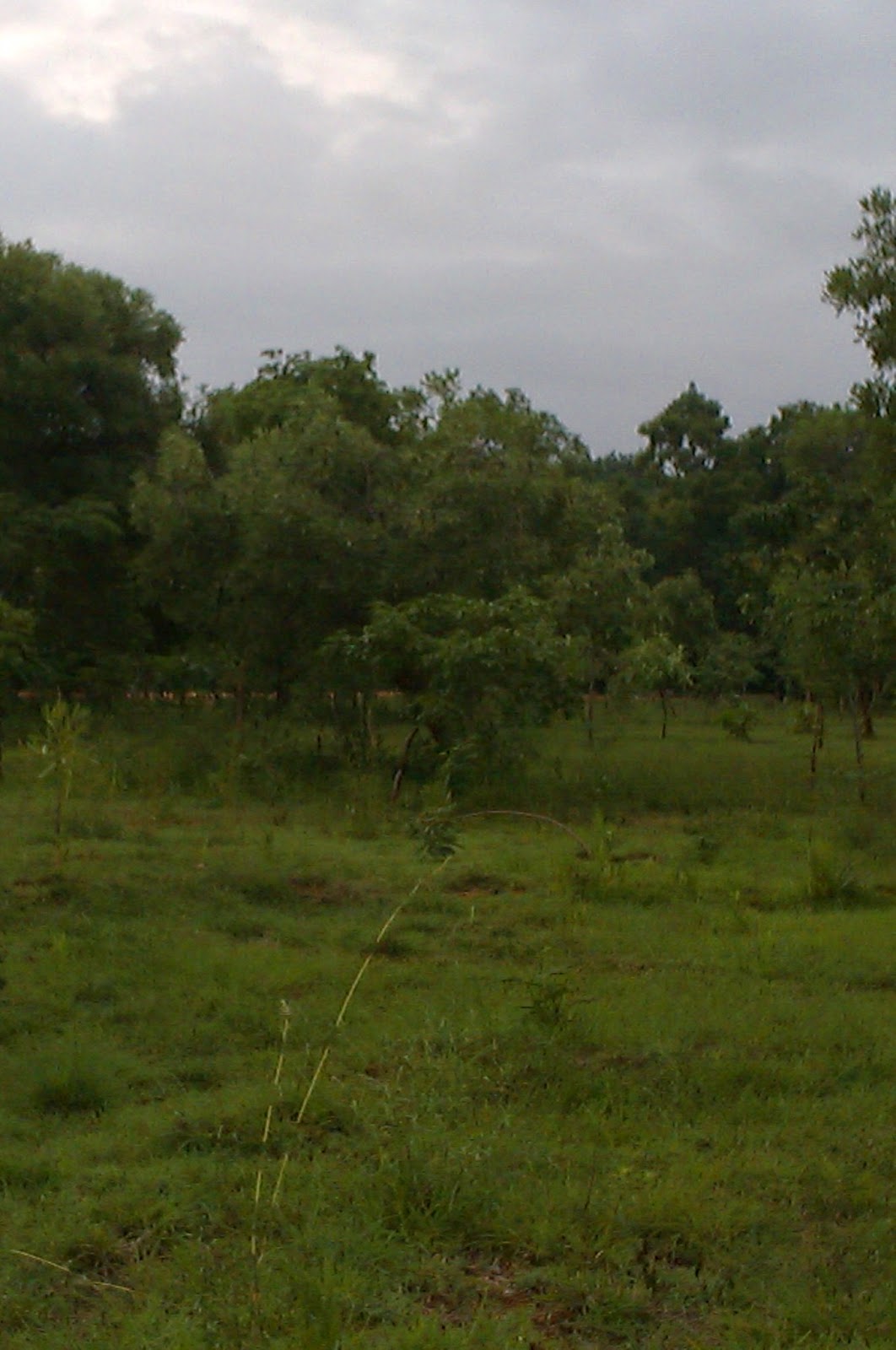 I pass these woods everyday,
Always different from the previous day;
The green woods and the grey clouds
Make it pleasant and cool today!

My mother should find it queer
That  she is late, her daughter dear
Has she stopped for someone's sake,
between the woods and the kukkarhaLLi lake?

She gives a ring to my mobile
Making me wonder for a while!
Should I avoid going to school,
and stretch under the trees so cool?

Posted by nowise novice at 7:24 AM No comments: 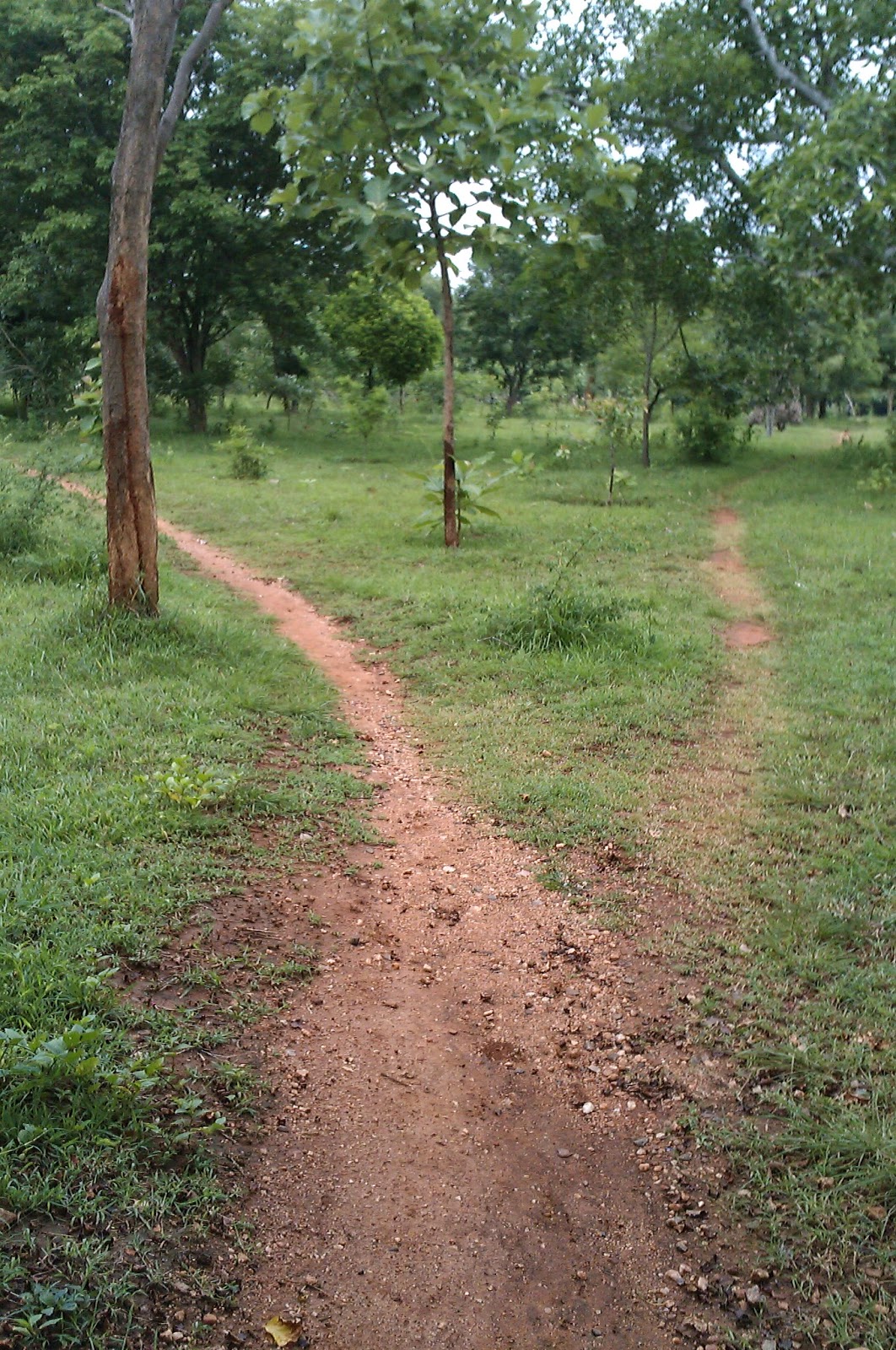 Two roads diverged in a green wood
And sorry I could not travel both
And be one traveller; long I stood
Looking at both

One was much travelled and the other wanted wear
I was wise and took the former
Which took me to my home,  my haven
To finish the  chapattis in  my kitchen

The other one I kept for another day,
For I knew I would come back on a Sunday;
For today it makes a lot of sense; Hence


It makes all the difference.
Posted by nowise novice at 10:39 AM 2 comments:

I had seen Naren as a promising student - bright, intelligent, and talented. He was a volley ball player, was among the top three in the class, played classical flute and took active interest in dramatics. When last heard, he had scored 97.5%  in the PU and had got entry into a prestigious Engineering college. But last week when I met him, I was shocked to see a pre-occupied, listless, young man of 28  who worked in one of those multinational companies, earned a handsome salary and had already presented a car to his parents! The proud parents had brought him home in that car. The young man sat next to his mother, with a shy smile, looked at her for all queries and the mother answered most of the questions. He was ‘very busy’, the mother said. The slight paunch indicated lack of physical activity, and he had nothing to contribute to the general conversation. No music, no movies, no socialization! "Looking for a suitable girl...hehehe..." the mother said."Hehehe....." I replied.
When it was time to leave, he said a quick goodbye and went and sat in the car as we still exchanged pleasantries. He was not there to help the grand - mother who walked unsteadily to the car and fumbled with the car door. Added to all these, he admonished her when the car door was shut with a bang!
I was totally disillusioned and disappointed at what he had become; what our education system had done to him.
He is an employee of a big MNC, and that was enough to get offers from the parents of eligible daughters! How would he be, as a husband? as a son-in-law? as a friend? ...................

My neighbour has a papaya tree and every time I open my backdoor,I am greeted by well shaped, healthy green papayas, some 30- 40 in number. (i.e. if the neighbour is not in her balcony. If she is there she sees to it that my attention is not diverted from her.) A dear friend that she is she keeps passing ripe papayas over the wall to keep my evil eye away!
One day I asked her to give me a raw papaya (not ripe), said 'my sister makes lovely sweet-hot chutney and I would like to try making it.It is difficult to get unripe papayas you know! It is better you give me on a  week end  when I may have 'some time' at my disposal. The sweet lady promptly called my mother on  the next Saturday morning and gave a hard green papaya that weighed 2 kilos, to pass on to me. I was prompt enough to find 'some time'. I called my sister and asked her for the recipe.  "Go to my blog 'rasakavala'  and you will get it" my computer savvy sister replied. So in my 'some time' I opened the blog, found the recipe and followed it to produce 4 bottles of golden yellow, spicy, sweet-sour chutney. My son was all praise for it and my father loved it and my mother gave the chef's certificate and I filled a small bottle with the chutney and passed it on to the neighbour over the wall. She in turn passed it on to her next-door neighbour over the wall.

Well, all is well that ends.......wait a minute! I was in my school that Saturday when my friend called. "Vidya, I am going to Bangalore for 3-4 days. Please keep an eye on the house. And I thought you may have 'some time' during the week end and make some chutney. So I have given a papaya to your mother. After I come back I will come and collect the recipe. I have to pass it on to my neighbour and my sister and.................." And there went my 'some time' of that week end.
Posted by nowise novice at 4:04 AM No comments:

Ganapathi habba is just over. One more session of collecting money,road blocks, processions, blaring microphones, same old film songs ending with a vote of thanks in an artificial, extra polite,sugar dripping voice followed by the orchestra anthem - "mathdalli melyavudo.. kuladalli keelyavudo".
But something has gone missing. On the day of the festival my friend, I, and our mothers went back in our time machine....
*public Ganapathis never existed. In the whole of Mysore two places drew everyone's attention- 101 Ganapathi in Agrahara attracted devotees and 8th cross Ganapathi in Vontikoppal attracted music lovers. The 'orchestras' have overtaken them!
*Kids went from house to house, inquiring,"Ree, Ganapathi ittiddira?" (have you kept Ganapathi?)There would be a competition among groups of children as to who visited the most number of Ganapathis. People happily tolerated them as they barged inside,put akshathe and prostrated in front of the deity. Some of them would observe the decorations and even comment.
*All doors would be open and lights switched on, expecting visitors.
*The tinkling of bells at around 9 would indicate that the Ganapathi is being given a send off.
*Some would keep the Ganapathi for 3,5, or 7 days or till Anantha Chathurdashi and immerse him in Kukkarahalli tank or in a neighbour's well.
Kukkarahalli tank in those days used to be a deserted place . But it would come alive during this season.People carrying torches and lanterns would go there in large groups immerse Ganapathi , eat puliogare and mosaranna and come home with a feeling of achievement.
*It was a chance for the artistically minded to exhibit their talents in building the mantaps for the god.The mantaps would be made using materials ranging from wood,coconut fronds, pith,injection bottles to sugar candies!The garlands made from cotton. Rangoli designs, lamps,serial lights..... everything had to be special and different!
All that is gone now!

I went shopping in the UK! It is a miracle that I came out with my brain intact! or....?
I have learned over the years that men create things to make their life more comfortable. So the English, who take off their shirts when the thermometer records 12degrees and declare that the summer has set in, built houses with fire places, carpeted the floor, used spoons and forks to eat, and toilet paper in the wash rooms. Their inventions did not stop there and went on to create the more......
If you have doubts, go on the net and search for bean stringer and egg poacher. Tell me if you don't get them!

It is just 48 hours since I landed here in Reading, UK, in my sister's house. But it seems a long time ago that I entered Bangalore airport - a little tense, a little worried - about how I would manage all check-in procedures, waiting for the announcements and walking to the plane, boarding etc. etc. etc....all alone! My son K1 accompanied me to the airport and hovered around outside till I completed the formalities and waved to him before entering the waiting lounge. To my surprise I was absolutely comfortable and at ease... so much so that others came to me for help!
I had a huge suitcase as check in luggage and a big keyboard for my cabin luggage and my hand bag with me. the girl at the check-in counter said the keyboard was too big and could not fit into the overhead cabin. I had to get it packed and check that in too. Though I had to shell out some money, I was very free with no weight to carry around.
Then the plane landed and I switched on my mobile and immediately received a call from A, my sister who was waiting outside. The helpline on the flight had said that I should follow the yellow boards, to reach immigration and baggage collection and it was so easy and fast that I was out in 20 minutes! I called A , who asked me to come out, where she was standing near a pillar. I did as I was told and landed in the car park while she was still in the lounge! one or two more calls and finally we met right in the same hall where I had made the first call!. :) and we drove home.
Posted by nowise novice at 5:36 AM 1 comment: